So…this new methodology allows you to use a MIX of ANIMESH and AVATARS and keep them in relative ANIMATION SYNC.  It also allows for DIVISION ING (A,B,C,D).

You will use CUSTOM_ABBACDA (as example) on the *sequences nc to assign GROUPS.

The next position, B will be assigned to ANIMESH or AVATAR with a B and/or K in the 19th position of its name.

The next position, B will be assigned to ANIMESH or AVATAR with a C and/or L in the 19th position of its name. etc etc

This version, marked by v12.xx in the HUD requires:

2 – A NEW Palette with proper naming and special ANIMESH script

4 – One to 9 COPY/MOD ANIMESH with special script and nc  embedded.

WARNING: You MUST RESET the HUD after any RESET on a PALETTE.

So, Ok I have switched from TROUPE-based where DIVISIONS(A,B,C,D) are assigned by name….

PALETTE-based where DIVISIONS are assigned by Palette-Name, more to the point.  So it is a switch from WHO you are to WHERE you are.

To play groups you use the following autofx commands when SequenceOnPlay,0  These will start on an event and events have to be at least 1 second after play. To start at time zero use SequenceOnPlay,7
GroupSeq=A
GroupSeq=B
GroupSeq=C
GroupSeq=D

GroupSeq=ABCD  will start ALL groups at same time.

Set SequenceOnPlay to 7 and its the same as starting all groups as soon as PLAY button is pressed.  Similar to GroupSeq=ABCD but at time zero instead of a time 1 second  or greater.

(GroupSeq=ABCD)  is no longer fixed at group assignments as before and now relies on the Division entry in *sequences.  Totally configurable instead of hard-assigned.  i.e. CUSTOM_????????? where ????????? is any combination of GROUPS A,B,C, or D.

And for ADVANCED GURUS, you can CHANGE the GROUPING on the FLY using an *autofx command DivisionPaletteChange=,  but wont take effect until the next dance change in the sequence. In essence you are changing the CUSTOM_???????? entry dynamically.  This allows for tricky grouping changes.

Permissions are controlled in the PALETTE for avatars and NOT in the HUD as before. Of course ANIMESH need no permissions as its assumed.

NO MORE dancer scripts in the HUD. ALL 9 are GONE!
No more failed dancer invites.

Also no need for ExcludeHudOwner. It is now gone.
UseTroupeForDivs gone.
ABorder has been gone.

Be sure that at least the ABILITY for Animatable is ON in the *palette nc in the Palette.

An little known feature that has been in the HUD for some time  is DANCE CHAINING and RANDOM DANCE and DANCE LOOPING.  Someone wanted unattended performance but never followed thru on its use.

Random Dance AND Dance Looping CAN be combined.  I will be making sure they work for ANIMESH too with further testing.  This allows for ANIMESH AI.  It will still require a rezzed HUD be left at the show-place.

The dark-side is that animations must be copied into the Palettes AND in the ANIMESH.

I have a tool to make that easier.

Animation Transfer / FileCopy box.  It can:

COPY all the animations in its box TO all ANIMESH and PALETTES within 20 meters that have the letter A thru R in the 19th position.

It can also KILL/DELETE all ANIMATIONS that are NON-COPY into objects with an A thru R in the 19th position that ALSO have the special ANIMESH script.  It can ALSO delete all animations inside of ITSELF.

See our earlier posts on SmartDancer 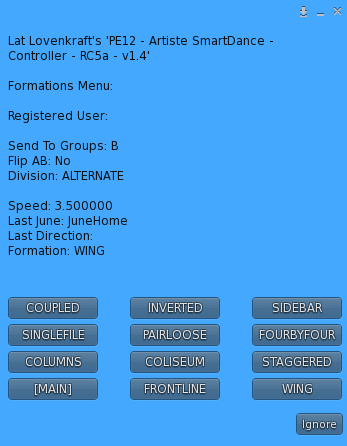 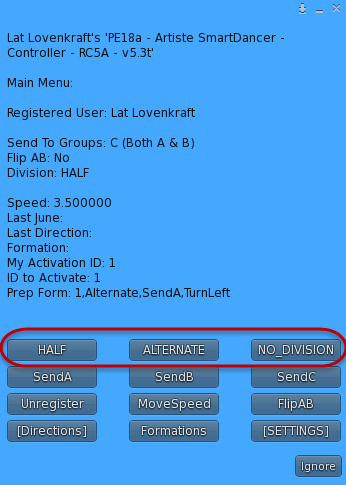 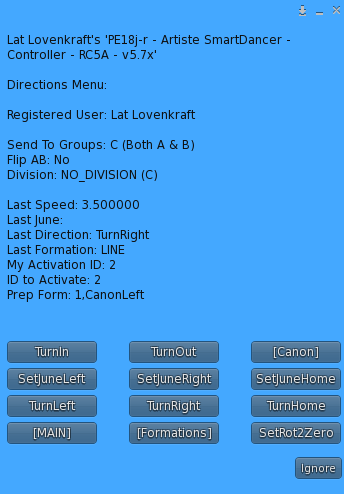